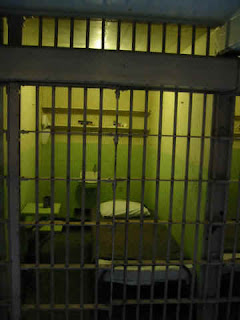 Did you know that when kids visit their parents in prison, they can't bring toys with them? I guess maybe because some toys are potentially dangerous or something, but in any case... the poor kids! Just sitting around with nothing to do while Daddy gets brought down from wherever-he-is. No dolly for comfort. No gameboy for distraction.

Imagine a skinny kid, alone on a metal folding chair or something, fiddling with his fingers, looking down an institutional hallway, waiting for Daddy.

But now imagine that same kid... with a book to read.

Okay, it's still horrible, but books are the best escape a kid has, really. A transport to other worlds. A way to learn other lessons, visit other lives.

So here's the deal.

A friend of mine is organizing an effort to send books to kids with parents in prison. Books those kids can read while visiting, and then take home with them. A gift. Something nice for the poor kids.

I'm putting a box together. Want to help? Any and all new/gently used childrens/teen books are most welcome.

Backchannel me at laurelsnyder(at) gmail.com and I'll give you my address.
Posted by Laurel at 6:05 PM 2 comments: 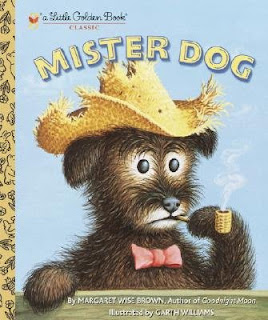 I want to apologize for the lapse in posting. Between the two small children (one of them colicky), the ongoing sinus infection, the bout of pinkeye, and the book deadline, I'm not doing a lot of reading...

But what I am reading, I'm loving.

With words by Margaret Wise Brown (of Goodnight Moon fame) and pictures by Garth Williams (he brought Little House on the Prairie to life) Mister Dog was a childhood favorite. And when I read it (for the first time in 30 years) last week I remembered why.

There's something disjointed about the book. Almost unedited. There's no real storyline at all. Rather, the book is a list of details about the life of Mister Dog.

We're told that Mister Dog is named Crispin's Crispian because... he belongs to himself. We're told about how he takes a little walk and discovers a land of rabbits and cats, and another one of dogs. About how he finds a boy who also belongs to himself, and about how he and the boy go back to Crispin's Crispian's house to make themselves some dinner. We learn that Mister Dog is a conservative (and what that entails is funny) and... that's pretty much the book.

Now, why does this make me love Mister Dog?

Because this book breaks all the rules. No tension or mystery of any kind. Nothing to resolve. Just a list of random details in one day in the life of a dog who wears a straw hat.

And the characters aren't even that loveable. The boy who belongs to himself refuses to share his chop with Crispin's Crispian, and looks to be a little standoffish. Crispin's Crispian is a biot of a loner (why doesn't make friends with the other dogs) and also a neat freak.

And yet... and yet these characters feel human to me, honest. They feel like people I know. Lonely people. Imperfect people. Highly unusual people in the world of kiddie lit.

And then of course, the pictures are amazing, and the words are... well... they're the words of Margaret Wise Brown.

Who was, perhaps, drunk when she wrote them. Or lonely and depressed. Or pulling our legs.

But still a genius.

Now, back to my insanely messy child-filled house (since I am *no* conservative!)
Posted by Laurel at 4:57 PM 4 comments:

I'm guest-blogging over at the Happy Booker today. 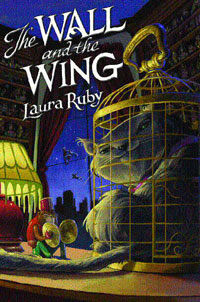 This week I read Laura Ruby's The Wall and the Wing . A dark-but-funny book I'll file under "orphans and magic."

It's a quick read, the story of a girl named Gurl, raised in an orphanage, lonely as can be. Gurl finds a friend in a boy named Bug, and together Bug and Gurl unravel the mysteries that lurk at the very core of their universe (why people have learned to fly, why neither of them can remember the past, etc)

What I love about the book is that it blends a contemporary voice and setting (New York, kid-lingo, etc) with a really unusual kind of magic (a pen that can conjure anything into being, a strange professor who pulls cats and kittens (because cats are riddles and riddles are everywhere) from his pockets. And while some authors today blend such worlds, Ruby fully integrates them. New York street punks and sewer-alligators and street musicians merge seamlessly into a kind of old-world-gangsterland and both are overtaken by really interesting kinds of magic.

It reminds me just a bit of Harry Potter in this way. Complete as it is with orphans and a "Flyfest" vaguely reminiscent of a mad Quiddich game. But in some ways Ruby has risen to a greater challenge, as she's gotten wildly creative, but left the contemporary world intact.

Which is something I find difficult as an author. Merging magic and whimsy with the "real" world. It's something I admire in authors like Ruby, and Ellen Potter. Because it's so much easier to send magical flying beasts through a city you've invented. A city in which you can rearrange the architecture. R

uby's done an admirable job of leaving the buildings intact.
Posted by Laurel at 7:12 AM No comments:

Politically Incorrect ( and totally out of print)...

I thought I'd take a second today to talk about a book I LOVE, but that you're unlikely to ever have the chance to read. Since no bookstore near you stocks it.

Because the book, BEAUX, is long out of print, and too historically placed, too offensive on its surface (however well written), for anyone to ever bring back from the dead. Though you might find a first edition on ebay if you hunt.

Written by Evan Commmager (friend to Robert Frost and wife to Henry Steele Commager)) and illustrated by the amazing N.M. Bodecker, Beaux (essentially a smart southern belle's YA novel) was published in 1958. But it came out at just the wrong time for longevity.

Because (obviously) in 1958 the world was about to change in important and dramatic ways that would make topics like escaped black chain-gang members (wrongly accused) with thick caricature-ish dialects into innapropriate fodder for light and humorous storytelling.

But the book is also funny and clever and weird and smart as hell, and so if you're someone (like me) who stumbled on it before you were old enough to understand how little you knew about the complexities of race relations, feminism, etc... then you probably liked this book a LOT, since you didn't yet know better.

It's basically the story of a precocious young narrator (Chris), who wants to grow up to be a writer and "pen trenchant novels" in a garret in New York City. But this narrator is certain that such a life won't lead her to produce children, and so she sets out to keep a "book for posterity" for her sister's offspring. (Her sister is a docile and gentle young woman studying at Sweetbriar) So the narrator not only takes it upon herself to write a book for her sister's posterity, but to help her sister produce that posterity. She sets out to find a series of beaux for her sister, so that she can document their stories.

Along the way, she (along with her best friend Junie) tangles with gender and race, and fat old dogs and fleas. She also gets into trouble, throws up, and becomes a "popular girl" at the book's end.

But what makes the book special is voice. There's a strange quality to Chris' narration. A blend of the old south, and a sideways view of that old south. A recognition of the gender divide, and a subtle resistance of that divide. Chris is willful and snarky and iconoclastic, but she isn't addressing the icons directly, and she isn't aware of her own politics. Yet. Rather, she's a tomboy, a contrarian. And so she walks a fine line between the world she lives in, and the world that we (her readers) imagine she must surely be heading for, a world far removed from big layer cakes and blancmange and chautauqua. New York City. Civil Rights. Intellectual friends.

So in the end, I don't think this book *is* politically incorrect. I think its a rare thing, a book thoroughly of its time, but written by someone with a critical eye and a task beyond indictment.

And I think that we often find this in children's books, because they are not required, as many adult books are, to be self-aware. Children can stumble. Children are allowed. To stumble toward the truth, slowly.

Though readers are expected to be a little more savvy.

(I only wish I could find you an illustration online!)
Posted by Laurel at 9:24 AM 2 comments: