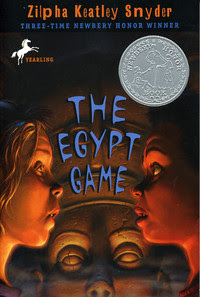 Via Jacketflap... I stumbled accross Jen Robinson's great post on Zilpha Keatly Snyder, who wrote many of my favorite childhood books, most especially The Egypt Game-- which is notable for being a non-magical book that manages to feel magical. A magic-ish book that also addresses "real" issues and carries serious emotional weight.

But now that Jen has written about it, I won't need to! 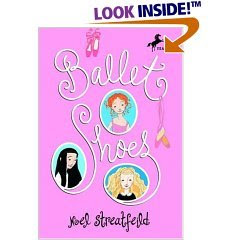 What is it about the English orphan that so captures the attention of the American kid-lit reading public?

I'm not sure why, but suddenly this morning I could not stop thinking about the Shoes books, by Noel Stretfield. Remember Ballet Shoes?

(Egads! Amazon-shocker. Could that cover--the one above--be any more different from the cover of my youth?)

Ballet Shoes, the finest of Streatfield's books, is the tale of three little orphan girls-- Pauline, Petrova, and Posy-- collected by an aging explorer/archaelogist (rather than bones) on three different excusions into the wild. When the old man disappears on another such adventure, the girls are left poor (though poor in 1937 fancypants England is not the poor of 2007 Sierra Leone or the South Bronx for that matter), to be cared for by their legal guardian (the explorer's niece)and their utterly devoted Nana (who raised the niece and now loves the family sooooo much that she refuses to take pay once they become "poor" and cannot afford nice clothes or fancy tea cakes any longer).

And what happens to three "poor" orphans in fancypants 1937 England? Why, they become Shakespearean actors and trained ballerinas, to support their hodgepodge family. Of course they do. They hit the stage and become famous movie stars. Why not? What *else* can you do when you don't have the money for new velvet frocks any longer, or Citroen cars...

If you detect a tone of sarcasm in my voice, I should explain... I don't mean to be severly critical by any means... I LOVE this BOOK! I do. But I have a hard time with it now that I'm a grownup, because it is soooooo far from the reality I now see around me. Concerned as it is with tiny comforts and the self-involved search for wealth and fame. This is not a political book. Not at ALL!

But when I was a girl? Back before I knew about genocide and AIDS and nuclear capabilities and national statistics on education and leaching plastics? Back then I didn't know from sarcasm. Back then I wanted to be a ballerina, an orphan. I wanted to have whooping cough in the English countryside, ride the tube, live in a house full of interesting boarders... I loooooved these girls and their lives.

And that's the point of this post I think-- that there is something lovely about the fantasy-life of people who lived before CNN and blogging (and equality I guess). One could--reading the Shoes books-- dream of being a ballerina or an explorer. Dream of eating tea cakes and wearing velvet frocks. Dream of being adopted by another family, a more fascinating family. Because the books were so utterly devoid of any awareness of the world beyond the books. It was a good thing, in 1937, to dream for yourself. To seek comforts. To have a devoted servant or a highfalutin pursuit worth abandoning a family for...

In 1937, talent and intelligence (above a certain strata of society) was a kind of manifest destiny. Gifts were rewarded with further gifts. A passion for life was rewarded with a good life. Or that was the attitude anyway.

I'm not sure I'm doing the book justice here. Not sure I'm getting at what I want to say. that this book far predates any kind of meta-thought, any kind of political imperative for a child. This book is about people who live with an expectation of the world being a comfortable and interesting place. And what they do to insure that the world lives up to its potential is a fabulous and wondrous tale. These girls are perhaps a little selfish, and perhaps they ahve blinders on, as their universe is a little selfish, and also wears blinders-- believes that the sun will never set on the Empire and all that. But guess what? That's what children are all about. Selfishness, and blinders. The sun never setting on the world that is.

That kind of thinking is-- I think-- the kind of fantasy children need to feel safe, conforted, and to seek out interesting lives. There's all the time later for them to "know better". But as kids, they *should* all expect to be president, or a ballerina, or an astronaut. They should *not* settle, at age eight, for the realization that customer-service-representative is more likely the truth.

Until I wanted to be Noel Streatfield. Which is something I'm still working...

(side note-- this is a GOOD book for showing young girls a range of careers. Waaaaaay ahead of the curve. This book has women role models supporting themselves, educating themselves, living alone, in 1937!!!)
Posted by Laurel at 7:02 AM 1 comment:

Ladies and Gentlemen... We Have A Winner!!!

The winner of the "Name My Dastardly Villain" Contest is the fabulous Christy Lenzi, who is perhaps a bit dastardly herself!

I'll be using the name she so generously provided, Wichita Grim, in my upcoming novel, Any Which Wall, alongside any other name Christy likes. 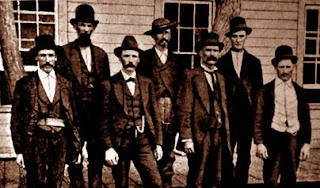 Well, I've finally found some time to write, and I need to pick a name at last. So I've been culling thought the amazing 200+ names people sent me, and I've narrowed the field a bit. Anyone have an opionion? I'm liking: 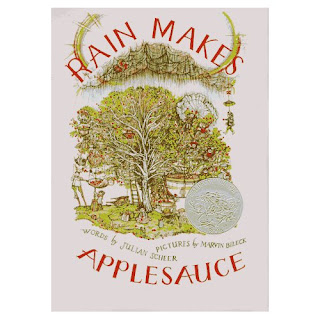 I'm in Baltimore right now, trying to work on the new book, while my very generous mom babysits Mose. And while I'm here, I'm also pawing through my old picture books down in the basement. Guess what I found?

Well perhaps this eloquent Amazon reviewer will refresh your memory:

THIS BOOK IS JUST A BUNCH OF NONSENSE SENTENCES & THE DRAWINGS ARE STRANGE. I DON'T GET IT & THERE PROBABLY IS NOTHING TO GET.

Despite the idiocy of "H. Price", you should run out and get your kid a copy of Julian Scheer's wonderful book. What makes it so appealing to me is that it's dreamlike and nonlinear. Each page is a sort of discrete little nonsense scenario, but then those scenes (all gorgously illustrated by Marvin Bileck) are unified by a few repeating lines,

A little trippy, as one might expect from a sixties era picture book. But the effect is lovely and magical and it draws a child in, with it's simplicity and the odd dialogue created by the repeating lines. A young reader gets to be at once the dreamer/silly talker and also the voice of reason. I remember shouting out the repeating lines when my parents read me this book.

Mom would say, "My house goes walking every day,
and rain makes applesauce."

And I'd laugh and scream, "Oh you're just talking silly talk!!!"

Or Dad would read, "Monkeys eat the chimney smoke..." and wait for just a second, look at me meaningfully, and I'd chortle, "AND RAIN MAKES APPLESAUCE!" (notice appropriate use of the caps lock, Mr. H. Price!)

It always surprises me that more people don't know this book. I guess maybe it feels a little dated, with those acid-flashback pictures and the non-narrative format, but it was, after all a Caldecott Honor book.

In any case, you should check it out of the library now that it's back in print!
Posted by Laurel at 5:06 PM 1 comment: 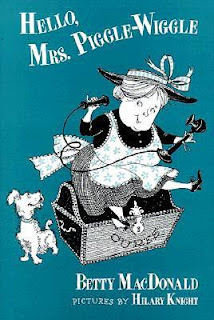 Remember Mrs. Piggle Wiggle? The portly widow with the trim ankles and the box full of magic cures for all the REALLY awful ailments children catch?

I find myself thinking about her lately, as my son heads into the "mines" phase of childhood development. "MINES, NO, MINES!" he screams as he grabs for a toy that is absolutely NOT his and which he has decidedly NOT been playing with. And I think, as I wipe the snot off said toy, "Did Mrs. Piggle Wiggle have any cures for "MINES!"?

She did not, I think.

Not likely. You aren't allowed to abandon a child alone on a farm for an afternoon anymore. But in any case, she's on my mind. So I thought (of course) she should be on *your* mind.

If you don't know her, run right out and grab a copy of the first book in the series. You'll love her.

In the 1950s graphic-art town she inhabits, all the kids have ridiculously funny names, stay-at-home-mommies, healthy afterschool snacks, and easily solved problems. And maybe that's the real charm of the Mrs. Piggle Wiggle books. The 1950s ease of her world. Because although we read these books with a sense of Mrs. Piggle Wiggle's insane intelligence (in solving afflictions like talkbackitis) , and even an appreciation for what was surely a meta-mind on the part of Betty McDonald (the author, who was also self-aware enough to write a humorous account of her battle with tuberculosis) since surely nobody could name a character Harbin Quadrangle without having a sense of sarcastic humor about it....

We also, in reading these books, sink into a world in which every problem can be solved. Each book is episodic, a series of linked stories really. And each episode is quickly resolved with a kind of "happily ever after" finality. It's nice. Very nice.

The smartypantsy needs of a reader are met by the language, the tongue in cheek tone. But the desire for a simpler world is met too. Yes, this is world where filthy kids who refuse to take baths learn their lessons in a week. When they are allowed to grow so filthy their mothers can pull radishes from the healthy loam caked behind the kids' ears.

Ah, if only it were so easy.

With pictures by masters like Maurice Sendak and Hilary Knight, these are truly classics.
Posted by Laurel at 4:54 PM 3 comments: