I really want to blog about the Mysterious Benedict Society. But I crashed my car, lost my Grandma, and discovered that both my sons have fevers. All in one day.

So it'll have to wait. 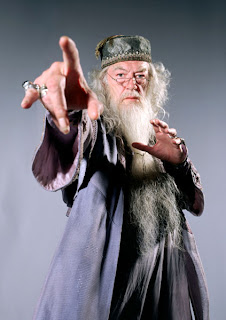 So, the kidlit threads and blogs are alive with the Gay Dumbledore saga... and in fact, it's fascinating.


One big question is HOW we teach when we have "secret information" from a living author. Information not in the text (though there's nothing in the text to refute).


Another issue is whether Rowling chickened out. Whether she should have/could have been more opaque, more detailed in her exposure of Dumbledore's romantic life.


A third topic is whether this suits the needs of the nasty-minded, since Dumbledore was an older man, a priest-model, and Harry a young orphan in need of love.


A fourth is whether Dumbledore (if he is in fact gay) is the ONLY gay man in the wizarding world.


And my thoughts? I think that Rowling didn't *know* her headmaster was gay in book one, but that by book 6 or 7 she was envisioning him as a gay character. I'm guessing that she made this apparaent in an early draft, and was edited down. If this is all true, I'm glad she outed him at Carnegie Hall (in any case, really) since I think the HP7 audience is exactly the population that needs to be more open to discussions of identity/lifestyle.


What makes me sad is that a heartfelt scene about Dumbledore's struggles against the stigma would totally fit into the book. In book 7, Dumbledore gets unearthed and destroyed in the press, and it would make perfect sense iof he love life came out in that process. It would further make sense for Harry to struggle with this a little, and to then ASK Dumbledore about it in his dream/post death conversation with the headmaster.


And this would have been such a good way for Dumbledore to create a GOOD stereotype as an older gay man. To show the world that because his lifestyle was so hated (like Lupin, actually) in the wizarding world, he was denied a chance to marry and have kids, and so became the headmaster of Hogwarts (instead of minister of magic), where he could put his love of children to good use.


Which ties it all together. Dumbledore pours his love into Harry in such a healthy way NOT because he's a dirty old man, but because he's been denied a family by the closed-minded world around him. This Harry would be able to understand I think, after being hunted/hated himself.


I feel like Rowling missed her shot. But I'm glad she's outing him now.
Posted by Laurel at 7:29 AM 2 comments:

What would people think of such a thing? A truly contemporary list of poets who might interest young (let's say high school) readers. And tips on how best to teach and best use their work?

Last I checked, ee cummings was still being taught as "wacky new poetry".
Posted by Laurel at 4:47 PM 3 comments:

Okay, so I'm a fan of finding adult themes in kidlit. And (as we all know) I'm a freak for Edward eager. So THIS BLOG is pretty much rocking my little world.

I'll be adding Oz and Ends to my daily reads...
Posted by Laurel at 9:07 PM No comments: 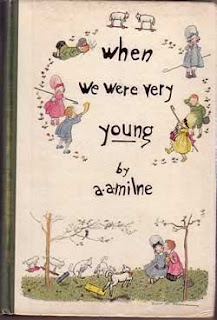 Speaking of poetry... what do people think of it?

Okay, that's a leetle funny, but seriously... I was interviewed the other day, and they asked a question about the first poems I can remember loving. And this was, for me, a very easy question. Because poetry, when I was little, when I read formal poetry and loved the sing-song quality of it... poetry was IT!

I remember my dad reading me Yeats and Blake. I remember, by heart, most of the Real Mother Goose, A Child's Garden of Verses, When We Were Very Young, and the Oxford Book of Poetry for Children.

I really can still recite pages and pages of these poems to this day, and that has to mean something. That has to be a HUGE part of how my brain got formed, right? If 30 years later, those fairy poems are still embedded in my skull?

Are they embedded in yours? Can you finish these sentences?

We daren't go a hunting, for fear of little...
The silver apples of the moon, the golden apples of the...
What immortal hand or eye can tame thy fearful...
It isn't really anywhere, it's somewhere else...
A wonderful view, of geraniums (red) and delphiniums...
My brain is shrunk, I cannot hear, there is a hole inside my...

(Some of these may be imperfect, as I'm typing from memory, and not checking myself, but you get the point. If you know these poems, and loved them as I did, you'll recognize them I think...)

So yeah, I love poems, and I always have, and in fact, my middle grade novel is full of this stuff, now that I think about it. Little singsongy poems. I'd show you one, but I'm afeared that the Random House Copyright Ogre would come for me.

At any rate, poetry was a key part of my childhood, and I wondered if other people felt the same way.

Poetry teaches us so much about sound, and rhyme, and the ambiguous nature of language. In poems, words get used most creatively. They get stretched and pulled and twisted, to fit the form. Poems can be silly and playful and engaging to children learning to read (or speak).

I realized this rencently, recognized the power of rhyme, when my 22 month old son began to sing the alphabet with me... but only the rhyming letters. For real! He knows G, P, V, and Z.

It's kind of amazing how they rhyme like that, with a loose meter...

But really, I ramble. What say you about verse?
Posted by Laurel at 5:48 PM No comments: 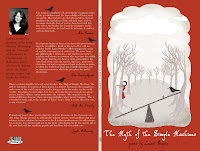 I try not to use this blog to promote my various (and scattered) non-kid-related projects. But I'm just soooooooo excited about this, I can't keep from announcing that ...

MY BOOK OF POEMS IS HERE!

And while it is decidely NOT for kids (there are naughty words) the cover was done by the wildly talented artist who is illustrating my picture book.

So that's something... kiddish.

I know not everyone reads poetry, but maybe you know someone who does? It makes a great Chrismakah present...
Posted by Laurel at 4:39 PM 1 comment:

It would seem that a revolution began this week, at the first EVER Kidlitosphere Conference. There's all kinds of fun coverage online.

(there's a ton of other folks blogging it, but I'm in need of sleep, so you'll have to play link-link-link to find them!)

I love conferences. I love kidlit. I love bloggers. I love Chicago.

So this pretty much sounds like heaven, and I'm sad I missed it.

But next year... I'm totally going to Portland.
Posted by Laurel at 6:01 PM No comments:

The Dark is Rising...

Dark days ahead for fans of Susan Cooper, I fear... 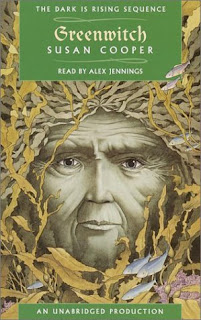 Yes indeed... if you read this blog... you're into kidlit, and if you're into kidlit... I probably don't have to tell you that Susan Cooper's AMAZING series, The Dark is Rising, has been made into a movie. Out this week! The movie is called called "The Seeker" and I'm not going to blog about it here. Because it is probably really terrible, and it'll get plenty o press without my tiny blog.

It does have me thinking about Cooper, and what makes her so good.

Here's the thing about Susan Cooper. She has this great skill in writing books that are a little bit magic. And books with a little bit of magic are my favorite kind of magic books.

I'm not one for high fantasy, wizards and dragons and spells far away from my life. What I like is magic that makes you believe in magic. Either because it begins in the "real" world, our world of regular stuff... or because the characters in the invented magic-land are so human you can't help believing in them.

If a wizard is going to live and breathe, he has to sneeze and stumble. If someone lives in this century and has powers, they likely also have a cell phone. Ommisions of such details are the biggest flaws in a lot of magic books.

If an author wants to write about dragons, I think that author should know what dragons eat, but also where they poop. Magic doesnt let you off the hook. Your world still has to be complete.

The Cooper books do a pretty fabulous job of blending both ways of making magic real. This series threads two families together. One family is a family of regular everyday British folks, who just happen to be friends with an old professor who turns out to be--- (I won't spoil it!) And the other family is an ancient and powerful magical family--- (won't kill that one either!) The families (and in some cases the books in the series) are distinct from one another, but they blend and clash into each other to great effect. The children from both families meet in THIS world, and the LONG AGO world.

And of course there are grails and powers and good and evil colliding in dramatic ways... but there are also everyday meals and whiny kid brothers and cars and parents.

And all of this is executed in a dreamlike way. The magic builds slowly, convinces you of its likelihood. Cooper does not rely on a willing suspension of disbeleif. Rather she creates, cajoles, convinces you of her magic...

I remember reading Over Sea Under Stone as a kid, and wanting to visit England. I wanted to go to Cornwall and look for this world that I was sure existed. There, in 20th century England. As it had in 6th century England. Both of them magical in their different ways...

And for me, that's the sign of good magic writing. Not just that I want to go there, but that I truly think I can... that the world is real. That MY world is magical.
Posted by Laurel at 8:33 PM 3 comments:

SUBMIT a text to the PICTURE BOOK CARNIVAL!

I don't fully understand how this works yet myself, but I'm all for literacy, picture books, mentoring, anf bloggers!

I think the gist is that they're compiling a list of picture books that help promote reading/writingskills in kids, along with ideas for how/why to use the texts...