Join the scavenger hunt and in a matter of minutes you can enter to win 3 new books from the Class of 2k8. Yeah!
Posted by Laurel at 6:33 AM No comments: 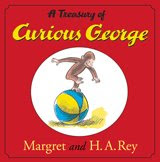 I've not had much reading time of my own lately, because my son is obsessed (OBSESSED!) with Curious George, and I've spent all my time reading this book instead of, say, catching up on the award books...

And while I loved George myself as a kid, I have to say that I HATE THIS BOOK! In particular I hate the opening lines of each of the stories in the treasury. Each begins like so:

This is George.
He was a good little monkey, and always very curious.
This morning George and the man with the yellow hat were at the...

Now, maybe I'm being really really nitpicky, but why switch your tense around like that? First George is present. Then he's past, like far far past. And then he's recent past, like this morning...

Why would you say, "He was a monkey" and not "He is a monkey" unless he is no longer a monkey?

Of course, none of these books were actually penned by the Reys. Anymore than the forthcoming titles, "George Talks on an iPhone" and "George Tries Out the New Spicy Chicken Sandwich at Wendy's". So I blamed that fact for the awful writing.

Then I went looking for the original (despite the politically incorrect illegal animal trade stuff) and found this:

This is George.
He lived in Africa.
He was a good monkey and always very curious.

So I guess the Reys were halfway there (in mixed-up-tense land) to begin with. BUT it should be said that the "IS" refers to the picture, and the "WAS" is used throught the story. And they don't then proceed with a "Four seconds ago" line... so that George doesn't seem dead in the original the way he does in "George Visits a Toystore" and "George Buys Chinese-made Clothes at American Apparel but then Drinks Free Trade Coffee After."

At least twice each night.

And a terrible secret keeper.
Posted by Laurel at 8:56 AM No comments: 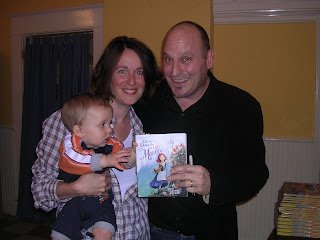 I'm too busy meeting my heroes.

Can you identify this man?

It seems to me that we kidlitters should participate in this cool project:

The Last Book is a project to compile written as well as visual statements in which the authors may leave a legacy for future generations. The premise of the project is that book-based culture is coming to an end. On one hand, new technologies have introduced cultural mutations by transferring information to television and the Internet. On the other, there has been an increasing deterioration in the educational systems (as much in the First World as on the periphery) and a proliferation of religious and anti-intellectual fundamentalisms. The Last Book will serve as a time-capsule and leave a document and testament of our time, as well as a stimulus for a possible reactivation of culture in case of disappearance by negligence, catastrophe or conflagration.

Contributions to this project will be limited to one page and may be e-mailed to lastbook.madrid@gmail.com or mailed to Luis Camnitzer, 124 Susquehanna Ave., Great Neck NY 11021, USA. In case of submission of originals, these will not be returned. The book will be exhibited as an installation at the entrance of the Museum of the National Library of Spain in Madrid at some point of 2008. Pages will be added during the duration of the project, with the intention of an eventual publication of an abridged version selected by Luis Camnitzer, curator of the project. The tentative deadline is March 31, 2008.

This call is open and we hope that it will be resent to as many potential contributors as possible.
Posted by Laurel at 3:47 PM No comments:

I thought this was of interest, a story sent to me by my very very good friend (and wicked smart-librarian) James:

Much of the world gets to celebrate today as Public Domain Day as well, the day when a whole year’s worth of copyrights enter the public domain for anyone to copy or reuse as they like.

In countries that use the “life plus 50 years” minimum standard of the Berne Convention, works by authors who died in 1957 enter the public domain today. That includes writers, artists, and composers like Nikos Kazantzakis, Diego Rivera, Dorothy L. Sayers, Jean Sibelius, and Laura Ingalls Wilder.

In countries that use the “life plus 70 years” term, works by authors who died in 1937 enter the public domain, including works by J. M. Barrie, Jean de Brunhoff, H. P. Lovecraft, Maurice Ravel, and Edith Wharton. Since many countries with this term recently extended it due to trade agreements, they’re often seeing these works re-enter the public domain after being removed from it, but their return to the public is still appreciated.

In countries like the US and Australia, which are under 20-year freezes of all or most of the public domain, it’s not quite as momentous a day. Here in the US, like Bill Murray in Groundhog Day, we’re once again waking up to a public domain 1922, as we have since 1998. Our next mass expiration of copyrighted published material is scheduled for New Year’s Day 2019, 11 years from now.

I did not know this, did not even know about the freeze. Huh!

I cannot even begin to fully understand the why/how of this. Anyone care to explain? 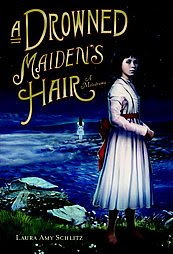 After an evening of sparkling beverages, fireworks, and late-night babies, we woke slowly...

and found our bathroom wall was rotting!!!

So we are starting 2008 by spending money we don't really have to retile a bathroom we barely manage to clean anyway (perhaps *that* was the beginning of the problems)...

But this only intensifies my need to finish THE DANG BOOK and turn it in. Because I can ill afford extra child care. Sigh.

All this to apologize once again for the intermittent posting. Really, I'm going to get CRAZY on this blog just as soon as "life calms down".

In the meantime, have you read Laura Amy Schlitz's A Drowned Maiden's Hair? I love it!

It's a gothic-ish tale, set somewhere between Baltimore and England. Which is to say that Schlitz is from Baltimore and set her orphan-stranded-in an-asylum-but then adopted-by spiritualists-and-taken-to-a-seaside-town-and-forced-to-work-seances (yeah, another one of those) somewhere nearby, but that it has the feel of a true Gothic tale.

I love Maud, the heroine, and I love the crazy seance-sisters, but most of all I love Muffet, the deaf/mute with a limp who mkaes odd noises.

And of course, I looooooove Baltimore, and "Cape Calypso", which reminds me of Beach haven, or Rohobeth, or Bethany, the beaches of my youth!
Posted by Laurel at 6:04 AM 1 comment: