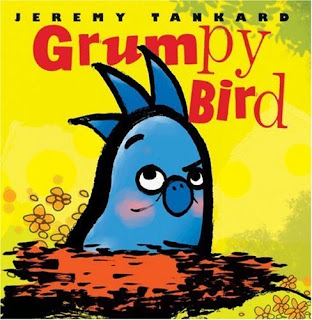 I've been trying not to write too often about picture books, in part because I figure you don't need me to tell you that Hop of Pop will make your child happy (though it will also resound in your brain like a drill after umpteen consecutive readings), and in part because it seems cheaty to "review" books that're only 800 words long.

But you really need to check out Grumpy Bird, and I've been shocked that I can't even find it at the two bookstores I frequent. It isn't bestselling enough I guess (though why that is I cannot imagine). So run out and request it. Get it on the shelves!

a. It's not too "nice." Grumpy Bird is grumpy, and that's okay. And when his friendly friends accost him with friendliness, he gets snarky with them, and that's okay too, Go Grumpy Bird! There are far too many nice books in the world.

b. The art is AMAZING. Mixed (and slightly surreal) media, old sepia photos layered underneath vivid cartoon/painting or something. I LOVE innovative design.

c. It doesn't really "make sense". In the real world, beavers can't, (last I checked) fly. And there's no complicated "world building" to explain this flight of the beavers... The beaver just decides to fly, and flies. The book depends on a tone of authority-- that you'll accept the rules of the world (e.g. bird wakes up "too grumpy to fly", though there's no explanation of why grumpiness takes away the bird's flying power). I think the best picture books do this-- operate with confidence and leave the explanation out (though it should be said that the worst books do the same thing. But fail!). But it's still an interesting point-- that the best picture books are good because of what they leave out, rather than what they include.

If I go on any longer I'll have taken up more space than it would require to copy the text of the entire book ten times, but you should check out Grumpy Bird. This is a debut book from a new author/illustrator, and I can't wait to see more from Jeremy Tankard!
Posted by Laurel at 11:59 AM 1 comment: 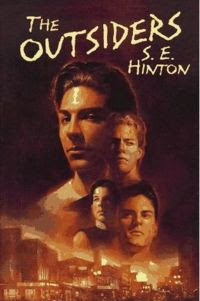 There's a really wonderful piece of writing today in the New York Times Book Review, a bit about S.E. Hinton and her insanely good book, The Outsiders (and if you've never read it, I think you somehow missed your teen years). I was not (in my own teen years) and am not now, especially interested in YA books. But The Outsiders was different-- more in a club with Catcher in the Rye than the Babysitters Club.

The article goes into all the many references in the book-- to Robert Frost and Shirley Jackson, and in some ways, the list-y story reads like an undergrad English paper called, "Direct literary referneces in the work of S.E. Hinton". But it's illuminating. And timely.

I was reminded of 19-year-old Kaavya Viswanathan, who was flayed last year for borrowing excessively from various sources for her own novel. If some high-minded, plagiarism-wary reader had persuaded S. E. Hinton to remove all references to the books and movies that inspired her, “The Outsiders” probably wouldn’t have slipped past the internal (let alone official) censors that governed ’60s adolescence. Forty years on, we may see the seams of its gilding, but the heart of Hinton’s groundbreaking novel is still, indisputably, gold.

We're so concerned with plagiarism right now, (and yes, I know plagiarism sucks, but...) because we can be. Because computers make it easy to catch plagiarism, in a way that only an incredibly well-read person with a photographic memory could have done in the past. And because we *can* hunt down every stolen line, we feel we should.

But this article is a reminder that when the work is good enough, it uses its references, and in doing so, it earns them. It becomes part of a tradition, and not derivative.

Certainly not theft.
Posted by Laurel at 6:59 AM No comments: 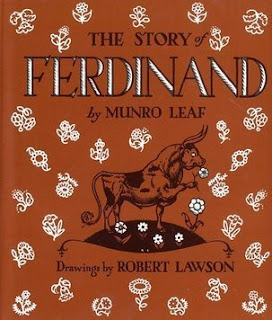 Tonight I'm thinking about politics. Because I wrote a bad scene today, a scene in my new book, a chunk of clunky dialogue about war, which I could NOT get right. So now I'm wondering whether our political leanings have any place in children's literature. I'm not sure...

I mean, on the one hand, I feel like they absolutely do. Like children's literature is the best place to help educate our young in subtle, serious ways... the best place to teach them that when we talk about "politics" we're really just talking about how to treat people. Justice. Service. Faith. Books are the best way I know to talk about such things.

And yet when I hear about an overtly political book I cringe a little. Even if I agree with the politics. Even if the book comes from a press I love and admire. They tend to be message-y, such books-- heavyhanded. A little dumb.

So thinking about this today, I wracked my brain, tried to think of children's books I liked, but that carried political messages. And I thought of Ferdinand!

Remember Ferdinand? The bull who didn't fight, who preferred to smell the flowers?

Written by Muro Leaf and illustrated by Robert Lawson, Ferdinand is a "charming" book, though that's a term much abused (and overused) in reviews of bad (trite, sacharine) children's books today.

But let's think about what "charm" is. Charm is a kind of deception. An understated attraction. And Ferdinand is both deceptive and attracting.

There's a brilliance to the simplicity of Ferdinand. The juxtaposition of a little cork tree and a bullfight in Madrid. The conflict of bee and bull. Size as a misread indication of anger, violence. A fallacy. The myth of our automatic roles in the world. And passive resistance as ultimate power.

With classic line drawings that match Munro's artful text, Ferdinand should be required reading for those of us (like me) attempting fruitlessly to batter home a message with an iron pen (or keyboard).

The test of whether propaganda is good? Is art?

When you read a political children's books, I think you should feel confused. You should have to ask yourself, "Are they talking about what I think they're talking about?" You should not be sure.

Because if you know for sure what the message is, it'll only serve in preaching to the choir.

And even then, probably only if it's a really dumb choir.

In closing, I want to say that I have high high hopes for this book, the Little Gernal and the Giant Snowflake, but I ahven't read it yet...
Posted by Laurel at 5:43 PM 2 comments:

Read my reflection on the amazing Madeleine L'engle over here, at Salon.com !


L'Engle once said, "You have to write the book that wants to be written. And if the book will be too difficult for grown-ups, then you write it for children." And this line of hers, which has been taped above my desk ever since I decided to try to write for kids, still rings true. It shows such deep respect for children, and for the complicated means through which they approach the world. The difficult language children speak.

She wrote for everyone, but L'Engle's books for children were of a different order. They harnessed the full power of her invention, and created a world we could not have imagined independently. She possessed something beyond ordinary human vision; L'Engle had epiphanies. Her creatures and imaginary worlds were both more imagined and more real than most, in part because of the deft way she blended science and religion into fantasy. She managed to define magic in terms that seemed honest, and in doing so made magic more true.
Posted by Laurel at 1:12 PM 1 comment: 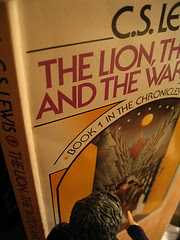 (the only cover I've ever known)

Bookslut's Heather Smith takes on Narnia-art, and hits the nail on the head.

Though honestly, I'd loooooove to see Hilary Knight take on "spooky bunny noir Watership Down".

In fact, I'd love to see Hilary Knight take on anything. Edward Gory and Edward Eager too. I'd like to see any of those three illustrate ANYTHING. The Joy of Cooking. The Bible. My mother's will.

Seriously. Some people have just the right touch. Pen and ink... and maybe a little humor.
Posted by Laurel at 5:23 PM No comments:

Jesus Christ and the Deathly Hallows... 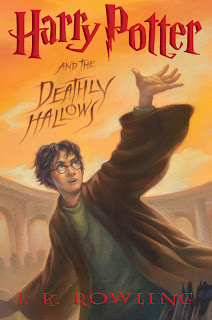 So I don't know whether or not I'm "supposed to" love it or hate it.

But I love it. I totally do.

It's a really good book. Clunky in places, because Rowling sat down to write it with 6 books of world-building behind her, and has to reconcile the past books with this one-- make every little detail match up. So the histories interweave in sometimes awkward ways. But that's how it goes, with a slow-growing series of any complexity. And Rowling's logic is TIGHT. And her characters are real.

I'm about 23 pages to the end of the book, and I just shed a few tears (yeah, yeah, go ahead and laugh) but that got me thinking about something...

And then I knew what it was! It was Narnia. It was Aslan. It was Aslan, with Lucy and Susan only walking so far... watching from a distance as the lion let himself be bound and slaughtered by the White Witch. Aslan going those last steps alone. Submitting. Dying to be reborn. Dying so that unknown (deep) magic could be fulfilled and undo the evil at work in humanity.

The use of submission so critical to both tales, but also other things--the 2 companions held back, too human to accompany... and then the two sets of descriptions... of the evil creatures in the darkness. A hoard of evil creatures in a forest, hungry for the death of goodness. The most evil of all waiting with a weapon, foolish, missing a piece of the story.

So much the same, these scenes. Harry Potter, Aslan, Jesus. The only thing that could overcome death was the willing submission to death. Powerful, heavy, lonely, sad.

Funny for me, as a Jew, to be reading this now, and shedding tears over it. Since of course, in the original, my people were the giants, the hags, the Death Eaters... waiting in the darkness, too foolish to see what was about to happen.

So what I still don't understand is.. why are the fundamentalist Christians so bothered by Harry? Here in Georgia, they're still trying to ban him from the library...