Not that she needs the publicity, but... 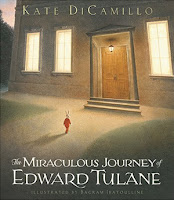 It goes without saying that when it comes to old-fashioned prose for the kiddles (and kiddle-like adults), Kate Dicamillo leads the pack...

But while everything she has written is good, Edward Tulane is a new kind of good (by which I mean an old kind of good).

It's a quiet kind of book, a paddle down a slow-moving stream. Not recommended for anyone who requires constant adventure, not EXTREME in the least. But that's why I like it.

Just a story about a toy, a china bunny, who learns some things about himself, and wanders through the world, pushed hither and yon by forces beyond his control. A distant cousin to the Velveteen Rabbit.

Candlewick makes beeeyoooteeeful books, and this one in particular is astounding. For production value it reminds me of my childhood copy of The Cuckoo Clock, by Mrs. Molesworth.

Which you should also read (if you haven't already)...
Posted by Laurel at 6:42 PM

love the blog! and looking forward to your beeyooooouteeeeful book too! all best, heidi

Heidi, I'm curious what you loved as a kid...